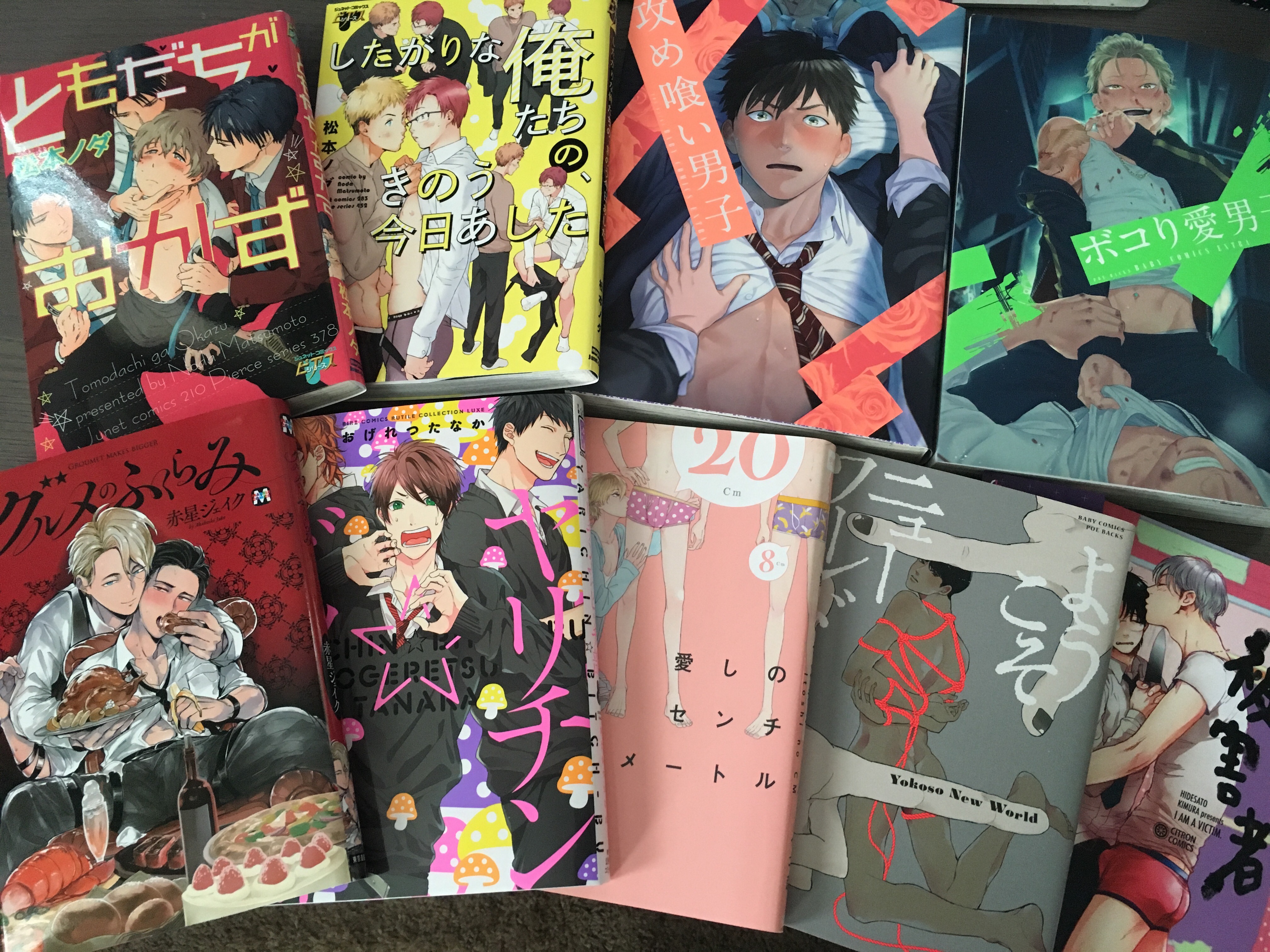 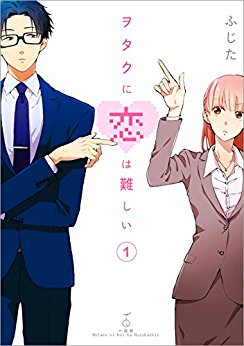 A funny and sweet romantic comedy about nerds who work in an office together. I bet you’re thinking it’s a four panel series but it’s not! ( ; ﾟДﾟ)

I really don’t know what else to say about it other than it’s legit v. cute and funny. A lot of really on-point jokes about cosplay too (well at least in my experience, lol). I think it won one of the interesting-manga ranking things last year? So it better get a goddamn anime. 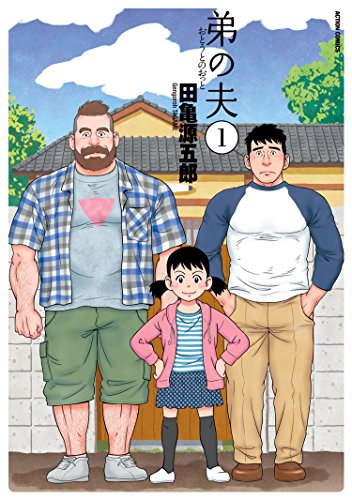 Anyway, glad it finally got licensed because it’s cute as hell (though the JP is simple enough that it might be a good babby’s first manga in Japanese choice if you’re looking for something like that). 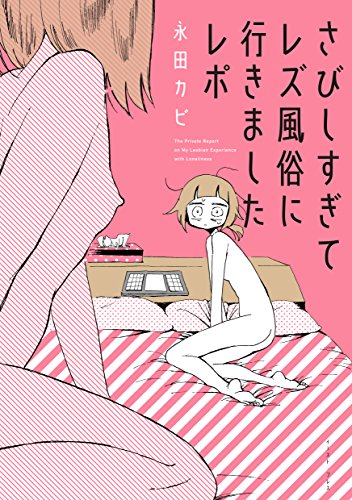 さびしすぎてレズ風俗に行きましたレポ
(The Private Report on My Lesbian Experience with Loneliness)

by 永田カビ(Nagata Kabi)
Other people have talked about this one better than I have, but it’s a very earnest and personal piece about the author’s struggles with her anxiety issues, sexuality, and figuring out what she wants out of life. Hard to read at points because she gets very real about her problems.

It was licensed! Neat. Either way it’s a good read. 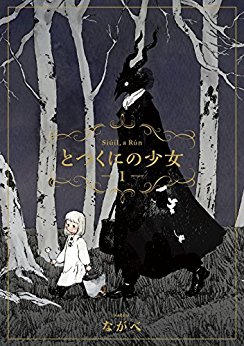 I forget how I found out about this one. I think someone might have RT’d a promo for the second volume onto my TL and I grabbed the Kindle version on a whim because it looked so pretty.

I was not disappointed! Nagabe has such a unique aesthetic and a really masterful approach to like… dramatic timing? with paneling. The whole thing feels very cinematic or maybe theatrical/stagey (in a good way) might be a better way to put it. Like while I was reading it it almost felt like a weird little black and white movie or a stage play. Each volume isn’t all that long and doesn’t have a lot of text but something about the way it’s paced just makes you slow down and take your time to appreciate it. It’s like the perfect thing to read on a rainy afternoon.

The story’s a very simple set up (although we still don’t really know a lot about what’s really going on!) with, for the most part, only two characters: the doctor (er, he’s only ever called “sensei” so that might not be the ideal way to handle that but idk) and the little girl, Shiva. The doctor doesn’t even really know who he is anymore thanks to the effects of the curse and struggles with how best to care for and protect little Shiva who he can’t even touch. A lot of the best moments (well, imo at least) are these beats of introspection with the doctor struggling to find the right words to say to Shiva. 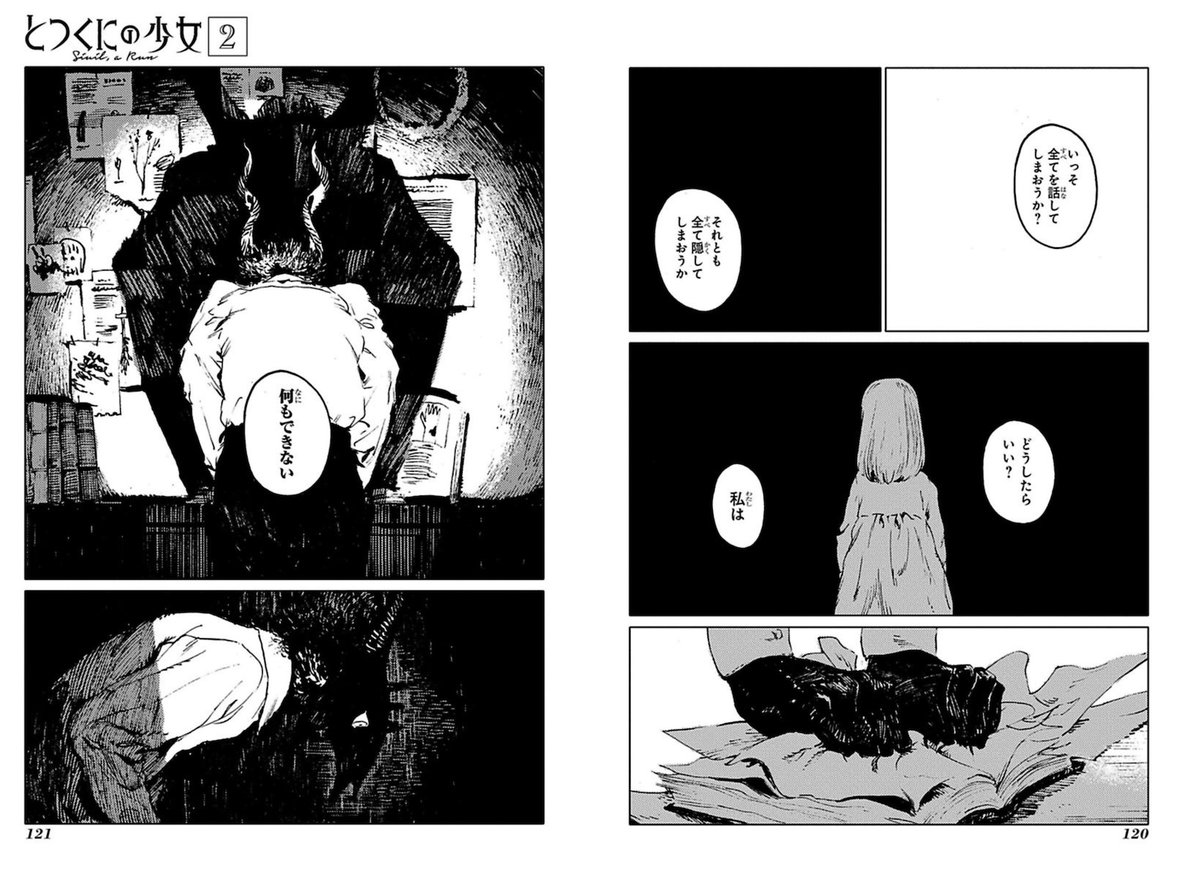 Anyway, idk what else to say about this one really other than it’s beautiful and I want more people to read it. I believe it was licensed recentlyish and is supposed to be out in English sometime early next year, though there is not really very much text at all (what text there is is quite simple), so if you’re a novice Japanese reader you might consider checking it out now. 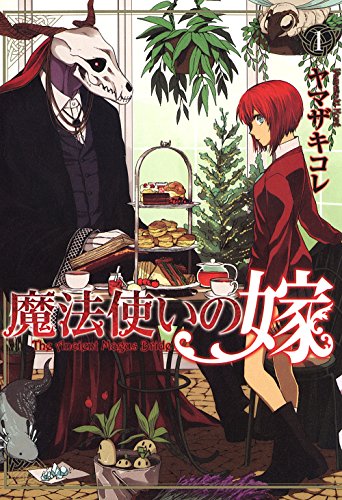 This was being advertised with とつくにの少女 because they run in the same online magazine and are from the same publisher.

Honestly, I binge read the six volumes that are out in like a day or two and now I don’t entirely remember what happened (oops). But Elias is v. kawaii and Chise is p. cool too. I hope it gets a full anime adaptation eventually because that would be neat.

iirc this is already licensed and nearly caught up too? Elias nendo is out this month btw. 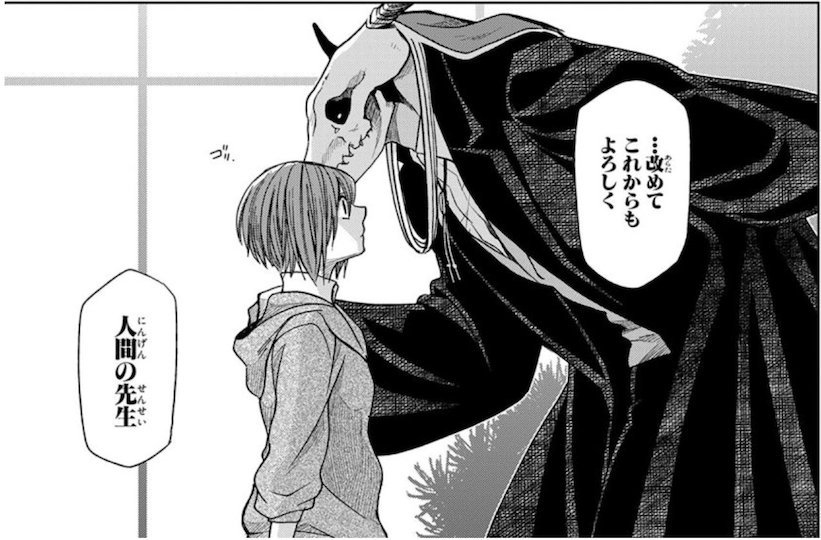 I also started reading Innocent at some point, but I paused at some point and forgot what was going on so I really gotta get back to that. 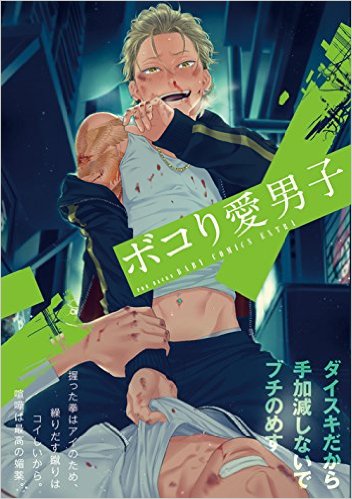 Well, like I said it’s an anthology. Picked it up on a whim because of some of the names in the author list and the title/cover. Shockingly not disappointing for a random pickup (I have the worst luck with that usually but nothing I randomly grabbed in this batch was bad!). I’m liking most of the random shit I’ve picked up from BABY. 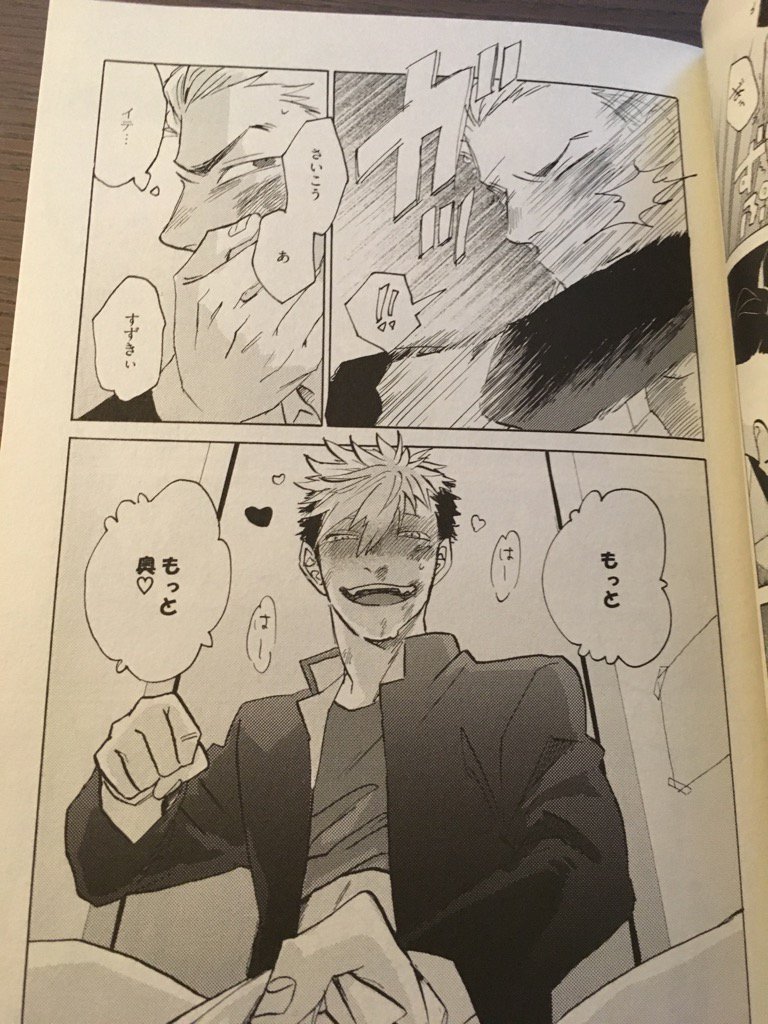 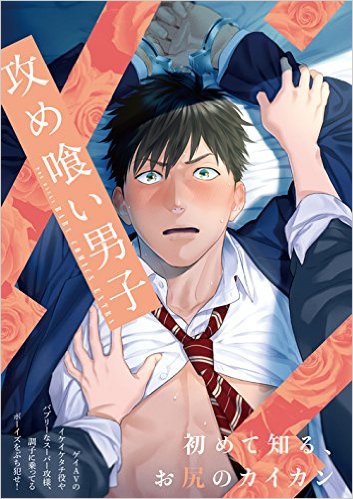 Anyway, if that premise sounds appealing to you I don’t think any of the stories in here are disappointing so yeah. 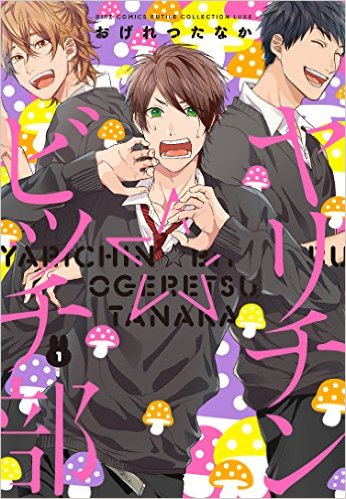 For example (this one isn’t that egregious really but for reference): 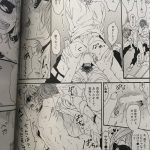 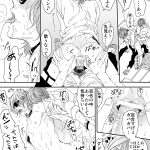 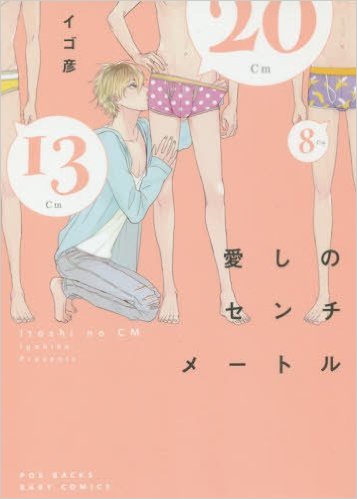 The main story is about a dude who’s preoccupied with the idea of finding a guy with the perfect size dick because of something preposterous his dad said to him. And there are… two (fuck I’m too lazy to pick it up again) other one shots in there (one of which is in 攻め食い男子). 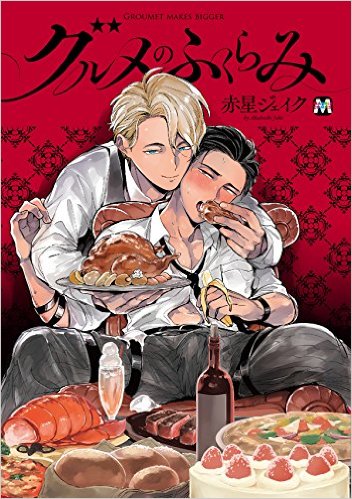 It’s a story about a guy who pops a boner every time he eats high calorie food and it’s ruining his life. He ends up in a compromising position with the grandson of the CEO of the company he works for and things get complicated from there! 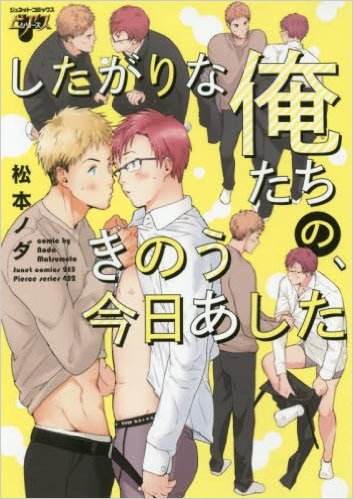 I actually had bought this and a bunch of other stuff by 松本ノダ in digital a while back (I can’t quite remember what prompted it, I probably stumbled on one of them on sadpanda and wanted to throw money at the artist), but I remembered it being good and figured I might as well pick it up in physical too.

Anyway, idk what it looks like on Kindle but they tend to censor more heavily so if you wanna pick it up in digital grab it on like ebook Japan or elsewhere. 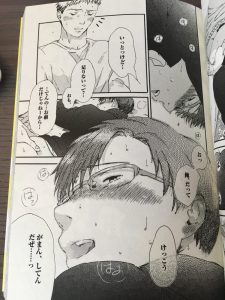 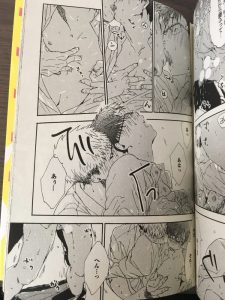 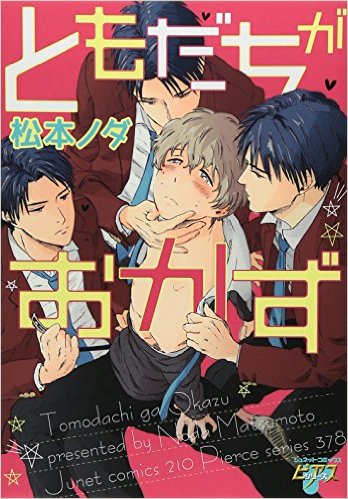 Unlike したがりな俺たち this one’s basically just a series of oneshots. The book’s titled for the first one (which has a different title itself) about a guy going through his day having progressively more wild sex fantasy day dreams about one of his friends––often while talking to him even! 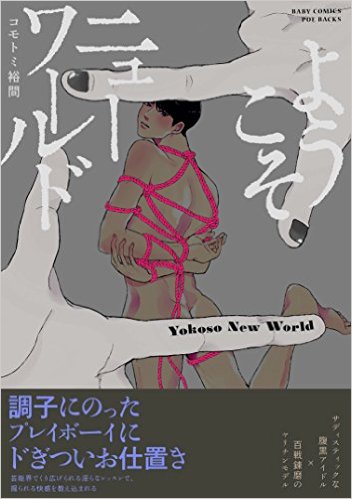 This was probably my least favorite book I picked up in this batch, also a total random pickup based on the cover/publisher. Definitely wasn’t bad though. 3 of the chapters in this one appear in other BABY anthologies (well two were in the two I bought and I’m like absolutely positive the weird box-man one is in the masked-men anthology despite not having read that yet). Nice art, good faces. The lead story was a little eh (also only shibari in the first chapter despite putting it on the cover?!).

My favorite story was definitely the box man one because it was so bonkers. 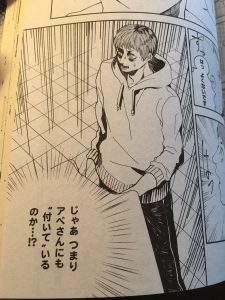 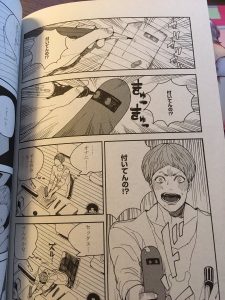 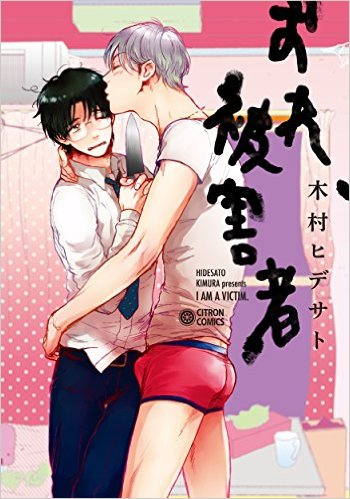 I think my favorite one was the first one, よろこびの先輩, though. It’s about a highly dysfunctional relationship between two college dudes, one of whom lives in a literal trash heap of an apartment and has a fetish for choking his partner during sex and the other who claims to only feel a begrudging attachment to trash man because he’s so helpless and could not survive on his own. The big dramatic reveal at the end is trash man confessing that he fell in love with the other guy when he drunk puked all over him one night after they went drinking and the other guy admitting that he really likes trash man’s smile when he’s choking him (also he’s developed a taste for erotic asphyxiation).

I like the art a lot and Kimura’s weird sense of humor around intriguingly fucked up relationships. 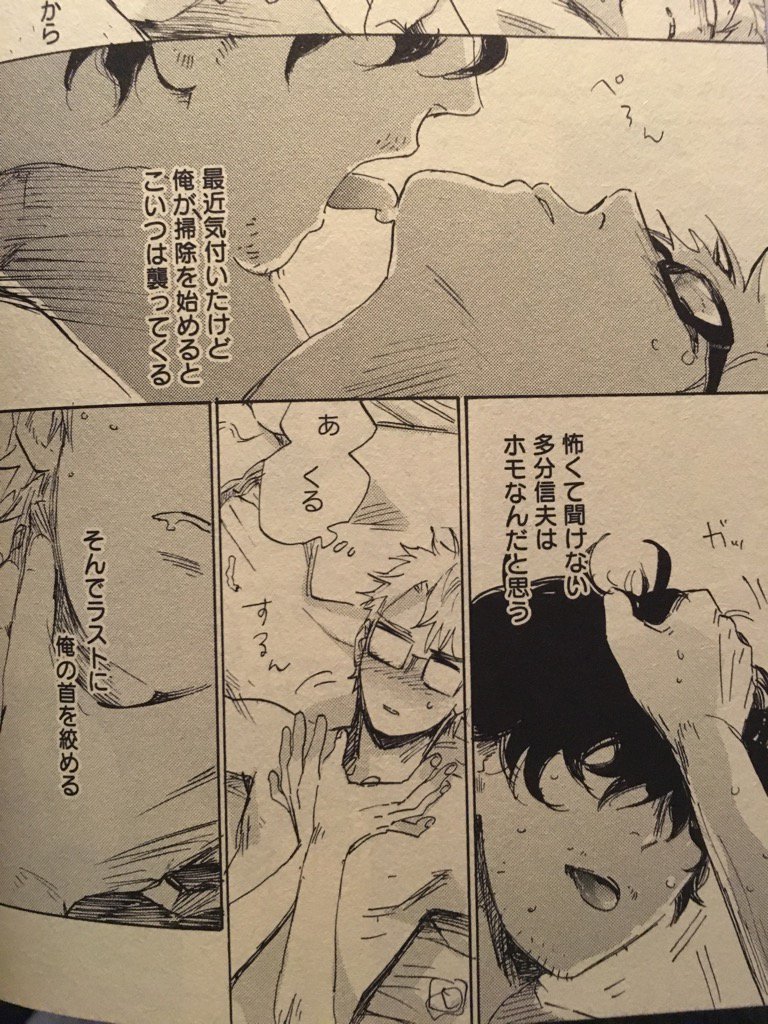 Anyway that covers it for this batch of stuff.