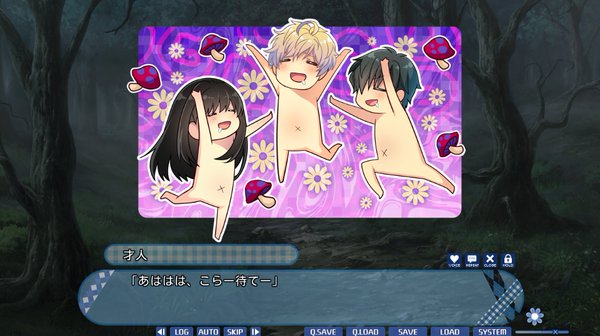 I’m trying to be less lazy and write about some of the stuff I’ve been playing. I suspect it’s not going to work because I am extremely lazy, but anywho here’s some thoughts about some of the games I played recently… 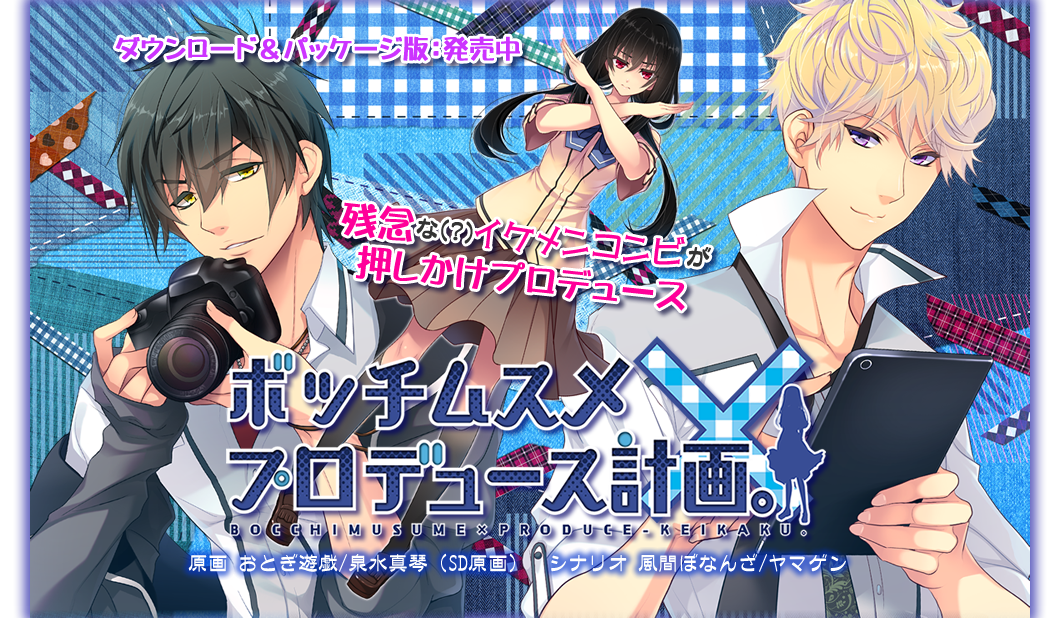 What’s it called? Bocchimusume X Produce Keikaku
Who made it? kalmia8
Where can I buy it? DLsite/DMM for the download version, the usual places for the physical. I got it from DLsite without any issue. 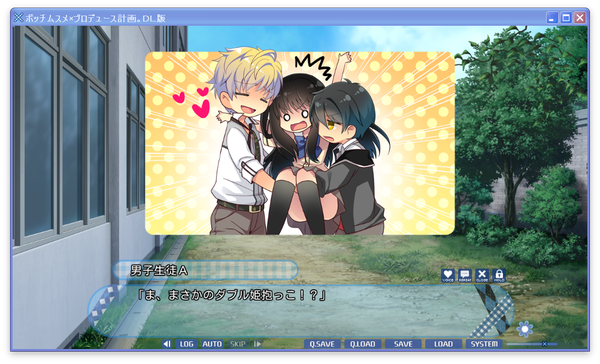 Plot-wise it’s nothing special really. It’s basically your standard nerdy-girl-is-secretly-beautiful-and-gets-turned-into-a-prom-queen/model/whatever plot. The real highlights here are the characters and the comedy (also the voice acting is top notch). Ema, the protagonist, is 100% convincingly a creepy nerd with no friends. I found her very relatable and entertaining. Her VA added a lot to the part (the game would not have been nearly as fun if they’d left Ema unvoiced imo). She has a lot of personality and frequently stands up to Saito and Miki and voices her opinions (as deranged as they might be at times) despite her insistence that she wishes she could be a passive otome protag who doesn’t have to worry about anything because everyone else just tells her what to do. 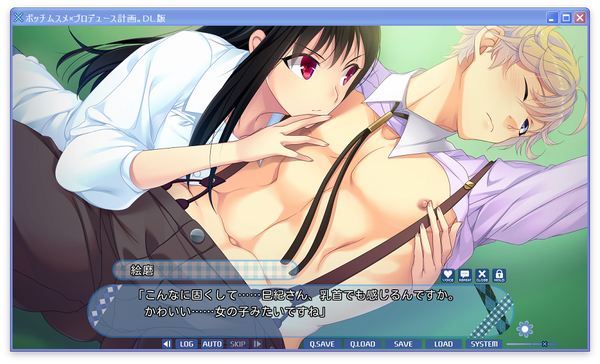 Miki and Saito are both a lot of fun too. They get a lot of dumb banter going and generally have good chemistry both with each other and with Ema. I thought I was going to hate Saito, but I warmed up to him pretty quickly. Also Miki’s VA does his damndest to channel his best Miyano impression for the part. The three of them spend most of the game together, even after Ema starts dating one of the duo, which was refreshing. I always hate it when the cast has good chemistry together and then the second you land on a route everyone else disappears. Also nice, they don’t do much bickering/jealousy shit after Ema picks a boyfriend––Miki and Saito remain bros and are supportive of the relationship once you get on a route, which was also pretty cool.

The unlockable 3-way route was spectacularly deranged. Don’t wanna spoil some of the surprises there, but holy shit Ema what is wrong with you (I mean this in the best way possible).

I guess on the negative side, the art’s a little wonky in places, but it’s not horribly distracting and there was a fair bit of scene-X-time-later-scene-X-time-later-scene sorta choppiness to the way the story’s presented (also in light of that I don’t really understand why the unlockable epilogue bits are sectioned off into the gallery rather than just playing at the end). And I guess the game felt a teensy bit short even for a half-price title, but maybe it’s just because I’d already played the trial.

Also, I saw some stuff about people arguing about whether Miki’s “designs” (lol) were really representative of high fashion or something, but, uh, that’s clearly a joke? This isn’t really meant to be some kind of realistic take on the fashion industry. I mean… 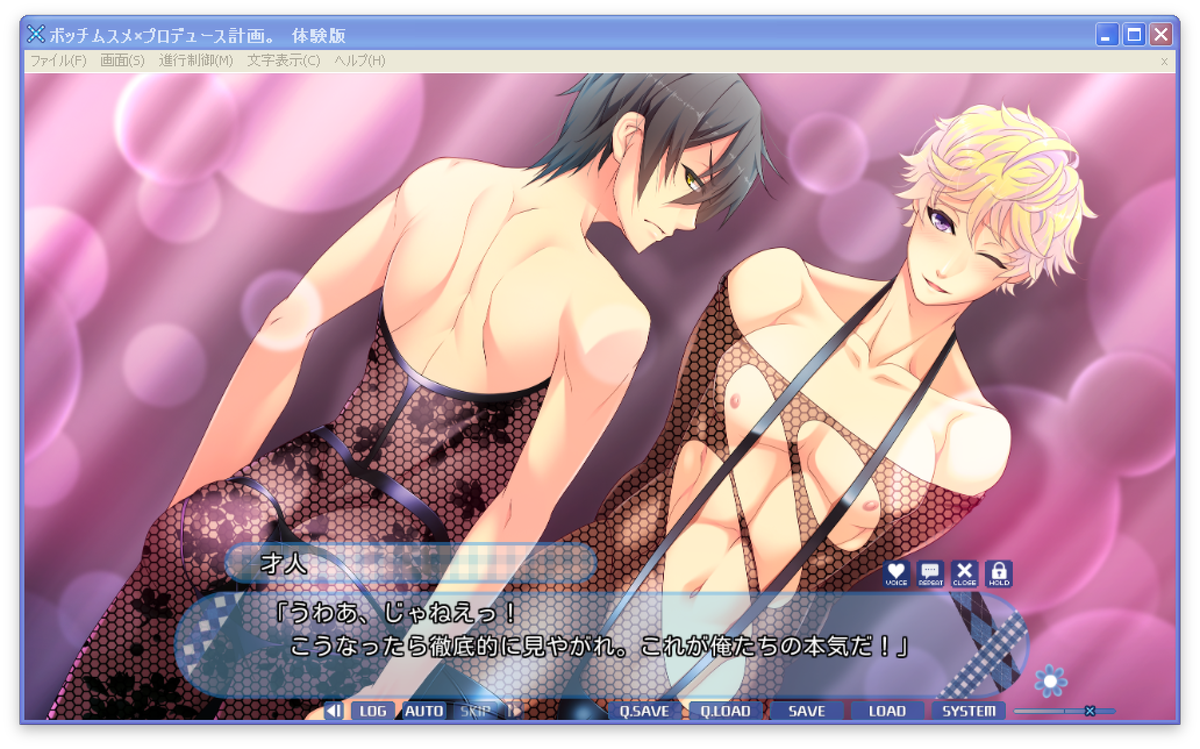 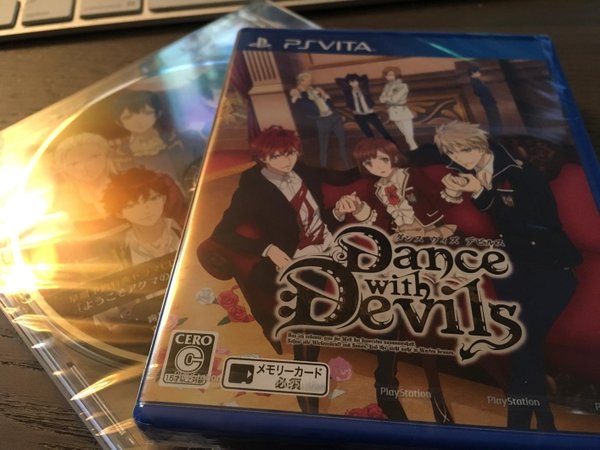 What’s it called? Dance with Devils for PSVita
Who made it? Rejet
Where can I buy it? Just about anywhere that sells JP Vita games. I got it on Amazon Japan (ships to the US w/o proxy)

I only played Mage’s route because the story is pretty dumb and I don’t care about most of the rest of the cast. After finishing Mage’s human/devil routes I’m tempted to go back and give Shiki and Urie a shot because they’re pretty fun in the route. 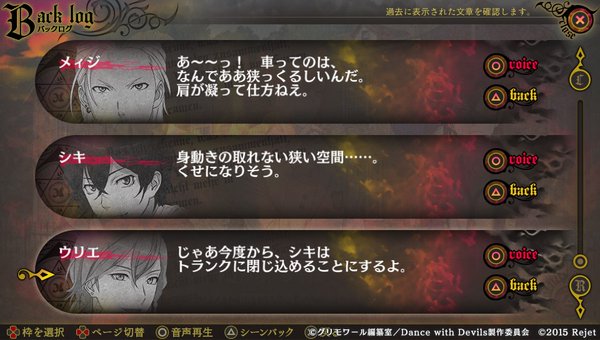 Anyway, I guess for a bit of overview the game is basically the same as the anime, you just have more focus on whoever you decide to go after. Early on you make a choice between two major routes, the Rem/Lindo route and the idiot-trio route (Urie/Shiki/Mage). I obviously picked the latter. Rem and Lindo don’t show up very much in the route and I found that to be a big plus personally. The three idiots get a lot of screen time and not just the one you’re dating, which was great because they’re hilarious together. 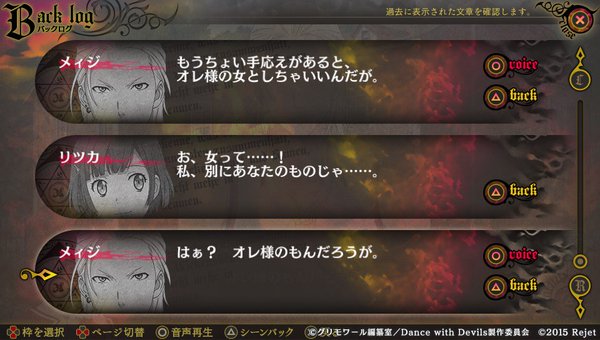 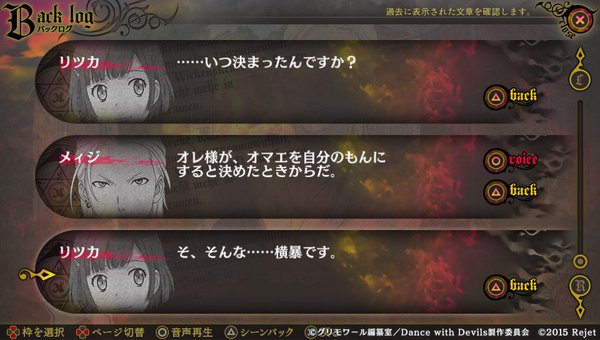 Mage was an adorable dumbass for most of his route, but that was to be expected. It’s a real shame Ritsuka’s not voiced (feels really weird having heard her talk all through the anime). I found her to be a surprisingly enjoyable protagonist. Her personality might not be all that unique all things considered, but she’s not an idiot and she actually talks back to the guys and stands up for herself. There’s this one bit late in Mage’s human route where it’s building up to a classic MISUNDERSTANDINGS breakup scenario and I was bracing to be really annoyed, but then Ritsuka just stops the dumb misunderstanding in its tracks and makes Mage listen to her and hear her out which was really shocking A++ DanDevi devs. 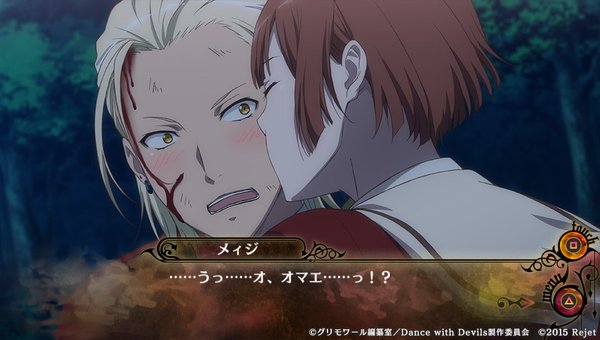 I had pretty low expectations going in and enjoyed myself quite a bit. Would recommend if you liked the anime but wanted more focus on the characters. 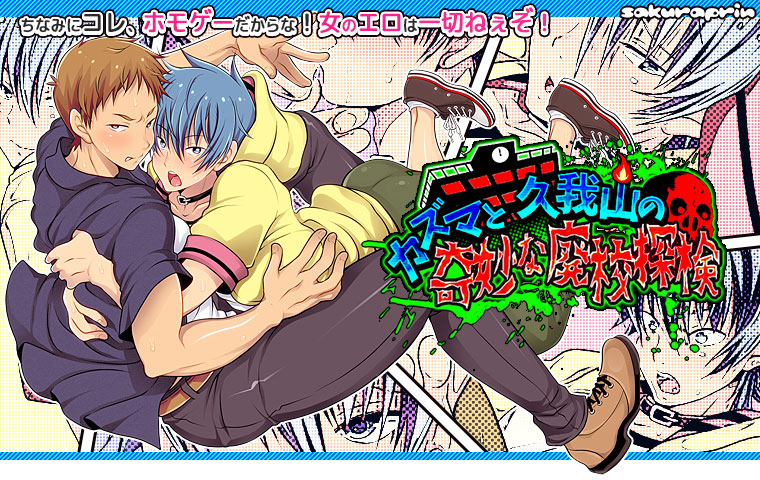 What’s it called? Kazuma to Kugamoto no Kimyou na Haikou Tanken
Who made it? Sakuraprin (aka. the Abaddon devs)
Where can I get it? On the website, it’s free.

This came out the other day. I haven’t played Abaddon yet, but I was bored so I checked it out. It ended up being pretty fun! Basically Kuga invites his friend Kazuma to go explore an abandoned school because Kazuma is into that sort of thing (and Kuga thinks he can get into his pants that way–– not that he needed much of a pretext earlier!). The game has VN segments, exploration segments, and an “R15” Kazuma molestation mini-game. 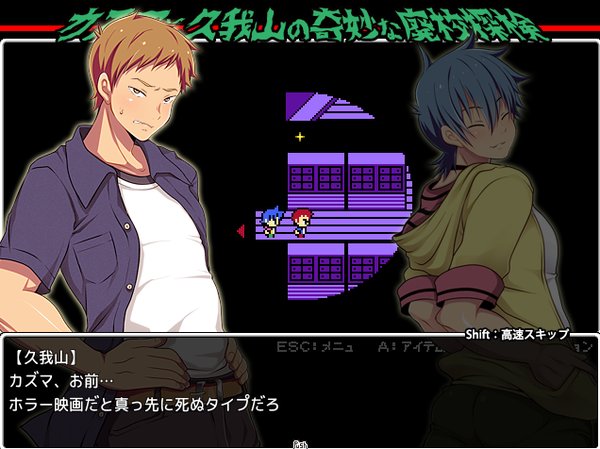 The voice acting is actually really good for amateurs in a doujin title. Both leads do a great job. I was really impressed. The puzzles were pretty fun, although it took me a while to figure some things out because there are some spots with very little hint about where to go next (so you end up just having to explore every room again until you find something new) and most of the map areas are very similar looking so it’s hard to keep track of where you are sometimes. That said I think I figured pretty much everything out by the end (hint to get End A: you can interact with the candles one more time before you leave). 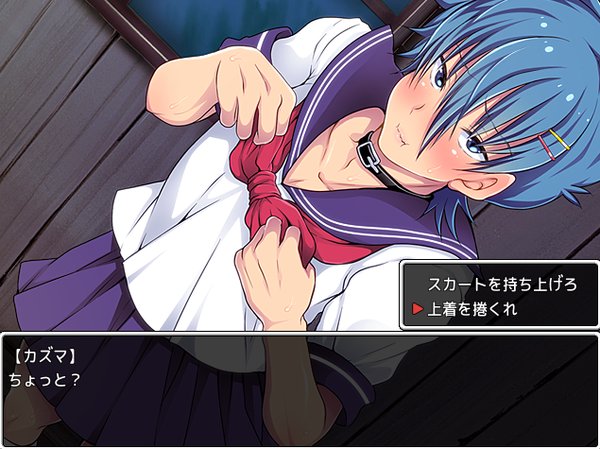 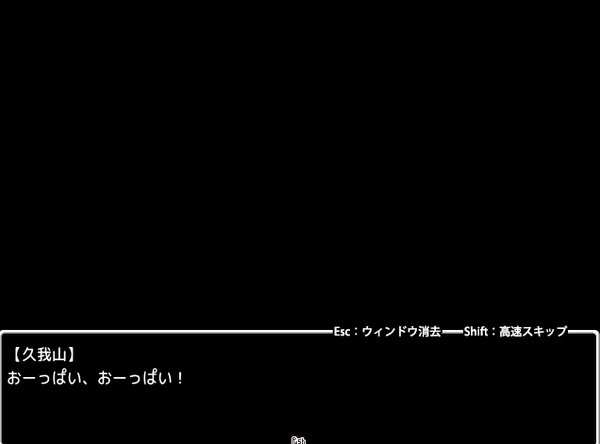 The little mini-game segments are pretty frustrating (it’s all pretty much trial and error) and you really have to save before you attempt a level lest you waste all your points. The last level is pretty tricky but is actually winnable. 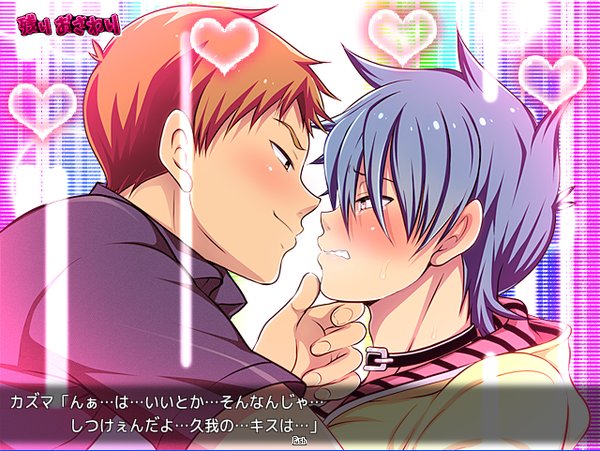 Anyway! I thought it was fun. tbh I’d like to see them expand the game into a more full-length title (or go back and voice Abaddon maybe?) or something. Sakuraprin seem like p. cool people. It’s pretty short and also free so I’d definitely recommend checking it out if you like silly BL and… idk what the correct genre for this is, it’s not really an RPG but “adventure game” doesn’t seem quite right either… Well, whatever.

In other news, I’m playing the Tsuminaru trial right now and I was so bored I wrote this post instead of finishing it.