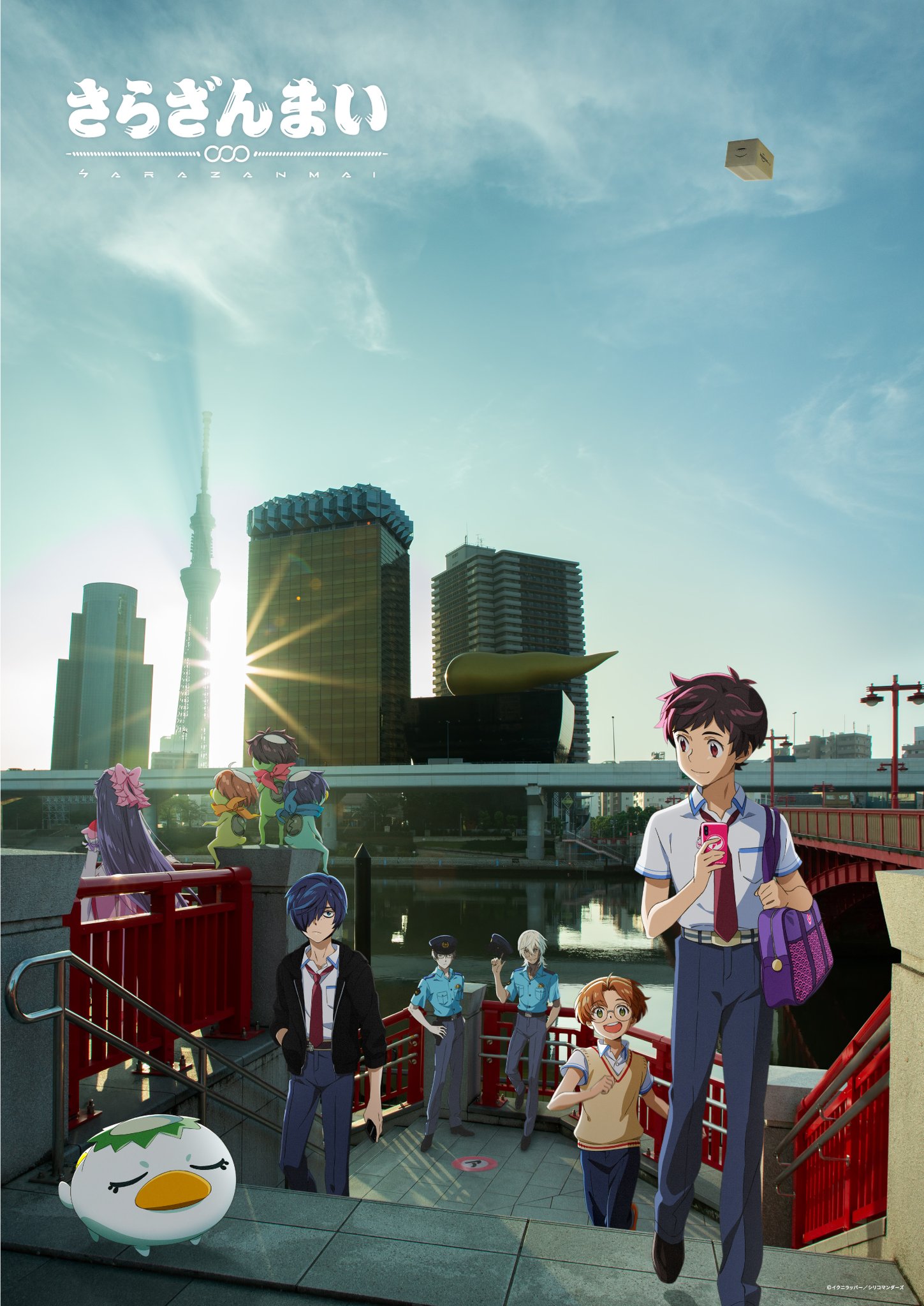 Sarazanmai –– Everything we know so far…

Because I keep writing dumb Twitter threads with miscellaneous thoughts about Ikuhara’s upcoming anime project, Sarazanmai, at 4 a.m. I figured maybe it was time for a blog post collecting all the promotional material that’s out so far so I stop repeating myself.

Let’s start at the beginning with the initial teaser trailers. I’m including transcripts of the Japanese for all these because if we’re playing pre-air speculation dissection that’s the thing to reference not a still-lacking-most-context rough translation––and on that note, all these TLs are pretty rough! The text itself isn’t exactly difficult language but it could mean a lot of things and there could be wordplay I’m not catching/etc, so I’m keeping it pretty stiff.

I’ll Let You In On A Little Secret Teaser

Even if everything went away and this whole world was empty.

“I’ll let you in on a little secret––you’re connected, but you’re alone. Don’t let go! Desire is your life.”

As Much As I Hate It Teaser

Am fake?
Is the world fake?
Are we fake?

Even If This Whole World Was Empty Teaser

Cross the river.
Because you can never return.

“Even if everything went away and this whole world was empty, I want to maintain this connection.”

Around this time the spinoff manga, Reo and Mabu – We Are Sarazanmai!, launched in the BL magazine Rutile. I still couldn’t really tell you what it’s about other than following the very peculiar exploits of Reo and Mabu in their attempt to raise a strange baby they found in the middle of the street on a plate and named Sara. I’m a little too lazy to do a more thorough summary/recap of what’s happened so far but I did do a thread on it a little while ago.

Released over the course of five weeks with five connecting parts. Here’s the full version:

Kazuki: “This world is overflowing with connections––connections by blood, between towns, of feelings. Everyone is connected here. So why is it that I can’t connect with anyone?”

Toi: “In this town, when things disappear, they’re forgotten. Shops, buildings, and even people are replaced by the new, and no one even notices. I don’t believe in connections.”

Enta: “But I do––I believe that we have a connection that can’t be severed so easily. And I know we’ll connect again.”

Reo: “Humans are such foolish creatures to cling to such fragile connections like that. Making assumptions is dangerous.”

Mabu: “With no beginning and no end, I implore you, the unconnected, let us open up a door––will it be desire? Or love?

The staff were announced and are as follows (assuming I didn’t fuck up anyone’s names again––the official site has the full list so check that if you’re looking people up). Check out kvin’s post on the Sakugablog for some insight on the lead creative staff.

Ikuhara and Suwabe gave a talk at AGF on November 11th where they introduced the series, talked a bit about recording and the themes/premise (along with tons of jokes about shirikodama). Some excerpts from various event reports below (these are reasonably close transcripts of what was said at the event).

Ikuhara: I’ve wanted to make a story focused on boys for a long time now. While there’s a lot of folklore about kappa, but no one’s ever actually seen one, which is why I’d like to say that the kappa that appear in Sarazanmai are the real deal! (lol) So the shirikodama is a pretty famous piece of kappa folklore and it’s a major motif in this series. Now, I know there’ve been plenty of anime series so far that feature youkai, but if you ask me those were all kid stuff––this series is going to be a real adult youkai story!

The Setting of Asakusa

Ikuhara: I actually started from the idea of making a story about kappa, and once I got into planning around that idea and doing research into various pieces of kappa folklore, I eventually settled on Asakusa. I figured, with its mix of old and new, surely there would be kappa in Asakusa. The Sumida River is right there and it’s a place that feels very alive––so I decided to set [the story] of these boys connecting with each other there.

The Theme of “Connections”

Ikuhara: We live in an age where, with our smart phones and social media, connecting with people is a daily activity––so I wanted to ask, what does that all mean? What do we want to do with [those connections]? And made those questions a central theme of this series, and I wanted to look at things like how there’s this conflicting mix of emotions where you have this desire to connect with someone, but that connection can also bring pain. If you maintain the connection, where does [the relationship] go from there? What happens to connections that are lost? Do we even need connections?

Suwabe: We’ve already wrapped recording for the series, but Director Ikuhara always made each session very warm and inviting by talking to us before we started. He’d get right in the booth with us and explain what each episode was about. If I’m being totally honest I think our director here is an extremely “unique” person (lol), and just looking at the text in the script we’d have many questions about what exactly any of it meant, but he’d always take the time to explain it to us. Of course, if he were to ever come in late we wouldn’t be able to start since no one would have any idea what was going on. It’s very much Ikuhara’s World here! But once he’d explain it, it would all snap right into focus and we could start.

A video message from the voices of Kazuki, Toi, and Enta––Murase, Uchiyama, and Horie respectively––played on screen. Murase commented that, “Director Ikuhara is very particular about certain things. For example, he got really specific about the scene where the shirikodama are removed––he’d ask for us to add exactly this percent pain, and this percent embarrassment and to sprinkle in just a little pleasure. He even acted out [the moment of having one’s shirikodama removed] for us.”…

Concluding comments from the three of them: Murase––”We live in a society where we can easily connect with people over social media, but this series will make you think about whether those connections are real or not.” Uchiyama––”I hope everyone is looking forward to it too, but we’re really excited to see what the finished product looks like ourselves.” And Horie concluded by saying that he is, “[the type of person who] usually just one-sidedly spits stuff out on Twitter without really thinking about connections” and that “if anyone [in the audience] is also like that, I hope you’ll watch this series.”

They also used the event to announce that there would be a weekly radio show hosted by Suwabe and Ikuhara starting in January and running every Saturday at 9 p.m. until the series starts in April called “Prezanmai”.

And also announced that Reo and Mabu have a Twitter account (with the suspicious sounding handle “@keeponly1luv”) which will also be running until the show starts in April. I’ve started a thread to translate their tweets as they come up here if anyone’s curious.

And then after the AGF talk we finally got something more concrete with a major update to the official site.

We find ourselves in Asakusa where, one day, three eight grade boys––Kazuki Yasaka, Toi Kuji, and Enta Jinai––meet a kappa-shaped creature named Keppi, who steals their shirikodama and transforms them into kappa.

And I think that about covers it so far. If I fucked something up feel free to yell at me.