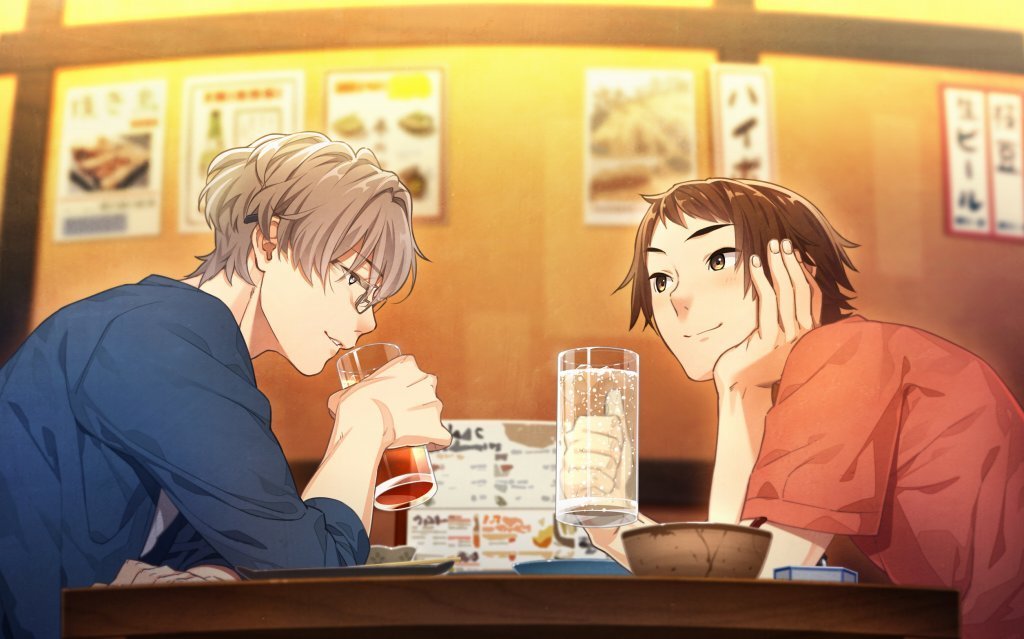 So, the September issue of Cool-B is out and with it we have some more information about parade’s Room No. 9! First off some basic info recap since it’s scattered through several posts now:

In terms of hard info, the big thing this month was the announcement of Daichi and Seiji’s voice actors:

Daichi will be voiced by 天然才 / Tenen Sai (or Tenensai? not sure if it’s supposed to break up like an actual name or not). Amemiya noted that Tenen Sai was the other staff’s second choice, but he fit Amemiya’s vision of the character better so he was cast over the staff’s #1. Apparently they had favored a VA who put a more mischievous spin on the character, but Amemiya preferred Tenen Sai’s more earnest/good-kid approach. Tenen Sai doesn’t seem to have had many major roles (or many roles period), at least not under that handle (iirc Amemiya said he didn’t have a lot of experience in general, but I might be remembering wrong and I’m too lazy to dig up the tweet to check right now) but if you’re curious about what he sounds like there are voice samples up for his role in Umisora no Fragments available here (he played the blond guy, Ryuuzouji Nobuhiko).

刺草ネトル / Irakusei Netoru was cast as Seiji. He was the #1 choice of the staff as well. Notably he voiced the lead in ClockUp’s recent Natsu no Kusari, you can hear some samples of his voice on the site but I imagine the tone is going to be pretty wildly different with Seiji. Also Amemiya pretty much just blurted out that Nikaido = Norizane (as if it wasn’t sufficiently obvious already) when talking about the casting selection.

A lot of the information is repeated from the website, but Amemiya has comments peppered through the feature.

On the CG of Daichi and Seiji drinking:

The two of them go out for a drink together for the first time in a while when they get a break in exams*. They reveal to each other that in the little time since they last saw each other they’d been dumped by their girlfriends. Daichi is drinking a lemon sour and Seiji’s drinking oolong tea.

*-idk what to call 就職試験 in English exactly since it’d be different depending on the field, but they’re employment-related exams. Daichi’s trying to become a teacher and I don’t think they ever specifically mentioned what Seiji’s trying to do, his dad’s in the government so it could be a public service exam thing.

Body hair settings are like Amemiya described, it’s a simple on/off toggle for both characters (pretty sure it’s really only applicable to Daichi since Seiji’s hair looks pretty sparse) and pubic hair stays put in either mode. Also in the body hair settings box there’s a screenshot of the settings page. I can barely make it out but there are definitely guro and scat display options in there (probably not legible at all in the scan, but they’re the 3rd and 4th options in the left-hand column).

On the bloodletting scene, “Daichi Side, Task One”

Attempting the first task after their confinement, “extract 600ml of Daichi’s blood”. With detailed instructions and proper tools provided, it’s almost like a standard blood donation. But it seems like it’d depend on personalities, values, and the nature of the subjects’ relationship whether they’d choose this option first.

The first task on Seiji’s side, “extract semen from Seiji”. The specific method is not specified as long as Daichi performs it, so he opts for a fairly orthodox approach of using his hand. They both have to concentrate and really work at it because [Seiji] isn’t going to be naturally aroused. Daichi has a towel over his face at Seiji’s request.

Task two from Seiji’s side:

Task three from Seiji’s side:

The third task from Seiji’s side. He’s wearing the same toys as in task two, but this time…? From this point on the two of them really start feeling the stress [of the situation]. But if they don’t do it, they won’t be able to eat. All that awaits them [if they refuse] is a slow death.

Interview with Amemiya from the July issue of Cool-B